About those child opera singers: here's the deal 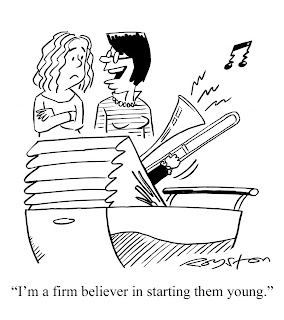 I'm going to let all you music-lovers in on a little secret:  we professional musicians don't have much use for the phenomenon of the Child Prodigy.  Six year old violinists playing Mendelssohn; ten year old pianists playing Rachmaninov; and especially *shudder* twelve year old girls belting out operatic arias... or country music... or whatever... on national television?  Yeah, it's impressive.  Sort of.  You can keep 'em; I have no interest, especially when it comes to the miniature singers.

You know that NPR program "From The Top", featuring adolescent or pre-adolescent performers stunning us with their "maturity" and precocity?

I am not a devotee of that program.

If you are, that's swell for you.  Enjoy. But most professionals in the classical music arena look askance at pint-sized virtuosi.  So many reasons...

For one thing, the great majority of child performers will eventually crash and burn attempting to make the transition from intuitive tot to analytical adult.  There was once a centipede who was asked, "When you walk, in what order do you move your many legs?"  The poor bastard had never thought about that, and became so self-conscious he never walked again.  This syndrome is the norm for talented kiddies.  Child pianists memorize intuitively, by ear; adult professionals memorize in the framework of an analytical system.  Children who have been learning complicated masterworks without really knowing how they were doing it can fall into a similar state of paralysis.

Furthermore, that "unusual musical maturity" you think you detect in the oh-so-polished phrasing of a Chopin Nocturne or Paganini Etude is not organic maturity at all.  It's apery; it's mimicry; it's the result of carefully imitating some adult's interpretation, be it from the teacher or some recording.  Musical compositions which express profound insights about love, loss and life are beyond the ken of a nine year old and that's just how it is.  Having a good ear is not the same thing as musical insight.

Another problem relating to emerging from the prodigy stage:  child stars become accustomed to being the most successful performer wherever they are.  They win the competitions; they receive the adulation; they are Number One, baby!  They are able to play difficult compositions eighty percent perfectly with little effort.  That in itself poses a problem: when such young musicians go on to major in their instrument at the college or conservatory level, they are too often content to continue achieving 80% perfection with 40% effort.  It's not unusual that they find, to their bewilderment, that they are surpasssed by less gifted students who achieve 95% perfection with 110% effort.  It's the old Hare-vs-Tortoise story applied to the piano.  A few of you may remember a child prodigy of some twenty years ago, a Greek pianist named Dmitri Sgouros.  He made a sensation performing on the "Tonight Show" and playing the Third Piano Concerto of Rachmaninov at age ten or eleven.  My wife knew one of his teachers in America and was privy to the following anecdote:  At age eleven, Sgouros played through the Brahms Piano Sonata in F Minor, a five-movement beast to play, at sight.  He then played through it a second time and pronounced the piece memorized and ready for performance.  Wow!  Gee!  Gasp!  Why, he's another Franz Liszt!

It's now 2012 and Dmitri Sgouros is a musician in this thirties.  Is he the greatest living pianist?  Does he perform to sold-out houses in New York, Chicago and L.A.?  Will he go down in history?  And was his performance of the Brahms F Minor Sonata a performance for the ages?

No, no, no and no.  He's got a website; plays in Greece and so forth--that's nice, I suppose.  See, the reality is that for every Yehudi Menuhin (prodigy who became an all-time great artist), there are one hundred Dmitri Sgouros's whose bright flame dims with age.  (I know that statistic is accurate because I just made it up.)

But as much disdain and eye-rolling weariness as I feel for instrumental prodigies (and I've actually taught a few in my teaching career), it's nothing compared to the scorn I feel for Children Who Sing Opera.


As Joan Rivers would say, can we talk?  Let's get something straight:  opera is to singing as neuro-surgery is to medicine.  No pre-adolescent children should ever do it, and few teen-agers should do much of it.  Yes, yes, I know all about Roberta Peters having made her Metropolitan Opera debut at age sixteen.  Big whoop, don't care.  Until their hormones have finished percolating, children should sing (duh) music written for children: in a children's choir, in school, in church, heck - even in an opera, providing it's a role written for a child. with a child's limitations in mind.

Let me explain.  The best metaphor for allowing children to sing adult operatic literature is found in Little League baseball.  A responsible Little League coach ensures that a ten-year-old pitcher will throw the ball easily, with a fluid, non-stressful pitching motion.  Some specimens in the coaching community, however, can't resist the urge to teach kids to throw trick pitches:  curve balls, sliders, screwballs, and so on.

The problem, of course, is that these pitches place a high degree of stress on bones, muscles and tendons.   However, the muscular-skeletal system of a baseball player in middle school is still a work in progress and, as such, incapable of tolerating such stress without inducing inflammation at best and serious injury at worst.

It's the very same scenario with children singing opera.  The fact is that many college-level voice majors are kept away from the music of Puccini, Verdi and such composers until they enter graduate school.

But here's the worst thing, the thing that really drives me NUTS:  when I try to explain this to non-musicians, NO ONE EVER BELIEVES ME!  ARRRRGGGGHHHH!!  Here are the standard responses I can expect to hear:

"Oh, you and your doctorate.  You just aren't accustomed to working with younger children, I expect."

"Well, I don't see any problem; he/she certainly seems to enjoy it."

"What's the matter, Glenn - feeling a little jealous?"  (Oh yes, how perceptive of you: I'm eaten up with envy that I shall never appear on "America's Got Talent".  *snort*)

"Well, I know the teacher, and that teacher is supposed to be really good.  I'm sure it's okay in this case."

NO!  No it isn't!  Not for an eleven year old girl singing Musetta's Waltz or "O mio babbino caro"!  Not okay, not okay!  That teacher is either delusional or a hack!  Stop singing opera!  Stop singing opera!  The vocal folds which produce musical tones are a highly delicate, extremely fragile, easily damaged organ.  Adult opera singers are at risk of incurring injury from over-use; what chance do you think Shirley Temple Junior has?  Think about it.  That Tweenie girl singing opera is writing checks her body can't cash, even though, yes, it might sound perfectly lovely to YOUR amateur's ears.  You don't get to hear her ten years later when her instrument has degraded to the point that a career in the opera field is no longer an option.

And my objections aren't limited to the vocal hazards.  Putting a child on television to sing, be it a local, regional, or national audience, is no way to raise a kid.  It's even worse when the TV program is in the format of a competition.  You do understand that a child with an unusually mature voice still has a child's emotional maturity, don't you?  A youngster who has been always been praised for her beautiful voice is swimming with sharks once a Career In Show Business has been launched.  Regardless of how much cash is earned, regardless of the fan letters received or the pride felt by the pushy stage-parents, here's what the child faces:

I know there are highly-educated, well-intended private voice teachers out there in your community who "specialize" in the vocal training of children and likely come with any number of glowing endorsements and recommendations.  Here's my recommendation: if your ten year old daughter has a nice voice, do her a favor and let her take piano or guitar lessons.  Then she'll have the solid musical foundation and musicianship skills that will pay dividends when she reaches the age Mother Nature intended for serious vocal study to begin.  If that highly educated private teacher gives her simple songs to sing with a modest range, asking her to perform only in studio recitals, you may just scrape by without doing permanent damage.

I mean, what's your hurry, anyway?  Children sing in church, home and school.  Leave the stage and the recording studio to the big bad grownups.  Thanks.

My new book The Opera Zoo: Singers, Composers and Other Primates is now available from Kendall Hunt Publishing. Order online at www.kendallhunt.com/operazoo or by phone from the Customer Service line at 1-800-344-9034 ext.3020.
Posted by Dr. Opera at 5:24 PM