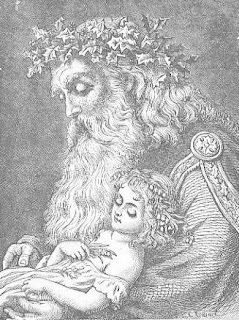 Since longer than I can remember, the Washington Post has had a New Year's tradition of publishing what it calls "The List", a pitiless compilation of what's considered hip, trendy and happening (that would be the "In" stuff), juxtaposed alongside what's tired, old-hat and tediously passé (the "Out" stuff).  I've spent all morning (how's that for devotion and taking pains, huh?) seeing if I could create a similar-yet-opera-themed list.  (Note:  the annoying thing about writing an opera blog is that, you know, all one's essays have to be about, you know, opera.  Oh well, beats writing about politics...)


The results of this hour's worth of intensive labor (hey, it's the holidays, cut me some slack here...) follow below, but first some explanations:
And here we go:  it's  ....   THE LIST.

IN:  HD Met Opera Transmissions at your cineplex
OUT:  PBS "Great Performances" of Met Opera performances on your TV

IN:  Satyagraha
OUT:  Ravi Shankar

IN:  Fabio Luisi
OUT:  James Levine

IN:  Follies
OUT:  A Little Night Music


IN:  Gerald Barry's The Importance of Being Earnest
OUT:  Christopher Theofanidis' Heart of a Soldier

IN:  Jackie Evancho
OUT:  Charlotte Church

IN:  Vittorio Grigolo
OUT:  Andrea Bocelli

IN:  Il Divo
OUT:  The Three Tenors

IN:  Drab, lifeless Met Opera productions directed by people who aren't opera directors
OUT:  Lavish, colorful Met productions which are greeted with cheers instead of boos.


IN:  Anna Netrebko
OUT:  Apparently, all other sopranos. Sheesh.

Gotta love that last one!  It makes for a particularly...